Tesla Glasses are used extensively by Russian military and security forces. They have been extensively tested by the medical departments of Russia’s Security Forces. With more than 10,000 units in active use, there are 40,000 active users. Their technology is based on 40 years of research.

They are not glasses, they are Quantum Biocomputers that function like a brain massage and programmer.

The frequencies entering the eye are getting folded (reflected upon themselves) within the eye crystal to become holographic signals. Every segment of the retina is connected to a specific brain area. And, the holographic signal hitting the retina activates a specific segment of retina and therefore a specific area of your brain. In other words, through the brain, you massage your entire body from inside including the internal organs that need treatment and program your organ in need of treatment for regeneration. 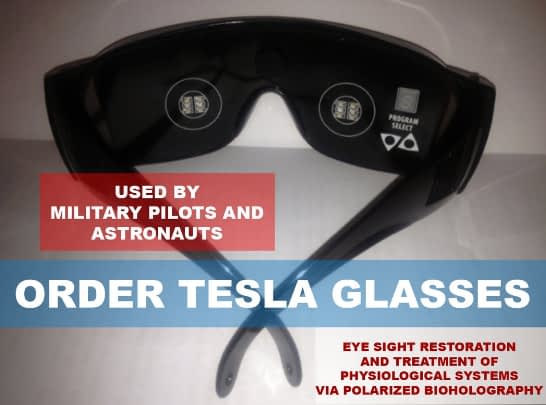 Tesla Glasses are a psi-generator (psychotronic generator) / Quantum Biocomputer designated for individual use at work and at home for correction and enhancement of various physical and mental functions, including the improvement of vision, using color as a natural integrator of psychological, mental and psycho-physiological processes. Tesla Glasses have eleven corrective programs with manual setting mode. The impact on the body is carried out not only with a certain color, but also via the rhythm of supplying the light pulses coupled with their modulation, thereby accelerating the process of recovery of the human body.

The device consists of dark goggles frame (124013. GOST R) and the electronic board mounted on the inside of the glass of the frame. The electronic board has two (for each eye) Light-Emitting Diodes consisting of six LEDs each, and a control device (two program selection buttons and indicator for the program number).

Who Shouldn’t Use Tesla Glasses

TESLA GLASSES use the method of Polarized Holography. Polarized Holography is the application of Quantum Physics for the purpose of rejuvenating all organs of the person through the Eye Crystal (Eye Lens and Iris). It is proven to provide significant physical and mental improvement, including a significant improvement in brain functions: decision speed, attention and memory.

The method consists in the control of the brain via triggering the holographic signal in the eye, and its modulation. This control overwrites any verbal and mental imperatives, is non-local (can be used for instantaneous transmission of information at infinitely large distances), instantaneous (exceeds speed of light), and simultaneously reaching out towards every cell in the body.

The method is based upon Quantum Physics, specifically, upon the theory and technology of Polarized Holography, which uses the modulation of the holographic signal according to the Kozyrev Mirror principle.

The advantage of the glasses over other Quantum Leap Polarized Holography devices is that glasses use an eye as a filter for filtering out all harmful linear signals, which unseal wave crystals. For example, microwave radiation shortens brain waves via “unsealing” the involuted wave crystals, thus, literally lowering the intellectual potential of people.

Thus, the effect of the TESLA GLASSES is based not simply upon the superficial stimulation of innervation. The stimulation of innervation, tone of the eye muscles, blood circulation, regeneration, and enhancement of all other biochemical and bioelectrical processes in the body are based upon the structural efficacy of Polarized Holography, which centers and focuses chromosomes, and prevents the transformation of metacentric chromosomes into acrocentric chromosomes.

The modulation via secondary holographic signals (see above) allows for the emergence of the most coherent and sophisticated scalar wave diffraction grating that produces the more clear zero focus within the wave crystal (of a wave torus on every level from the atomic, subatomic to cellular and molecular levels).

Ophthalmologists have found that all healthy people have rhythmic alternation visual perception. Man sees in turn by the right eye, and, then, by the left eye at regular intervals.

These intervals last for 2-3 seconds. The research was conducted using modern 3D technologies. And if one eye is covered by a blue filter, and the other eyes is covered by the red filter, the healthy person sees both colors simultaneously and separately. The left eye sees 20% of the image, and the right eye sees 80% of the image.

With age, these rhythms get broken. But the restoration of the “biological clock” is possible using Polarized Holography, modulated by color signals, with the frequency of the brain of a healthy person. And, as the positive effect, we can achieve a significant rejuvenation of the body.

THE PHYSIOLOGICAL SIGNIFICANCE OF EACH COLOR

Red Light (620 – 760 nanometers) improves vascular tone and activity of tropic hormones, normalizes cardiovascular activity and eliminates stagnation. Exposure to low-intensity red light of 630 nm (Laser or light-emitting diodes) leads to the activation of the drainage system of the eye and entire body. In an experimental model of dystrophic form of myopia, the inventor of Tesla Glasses demonstrated a protective (prophylactic) effect of color on the development of degenerative eye diseases. The use of this color has proved itself in the treatment of myopia, astigmatism, retinal degeneration, strabismus and amblyopia in children.

Orange Light (585-620 nanometers) improves blood circulation, digestion, skin trophism, promotes regeneration (recovery) of the nervous and muscular tissue, stimulates the activity of sex glands, enhances sexuality, increases the level of neuroendocrine regulation, increases muscle strength. In ophthalmology, orange light is effective in the treatment of amblyopia, myopia, optic nerve atrophy, degeneration of the retina. It is recommended for the elderly.

Yellow Light (575-585 nm) stimulates the gastrointestinal tract, pancreas, liver, activates the autonomic nervous system producing a cleansing effect for the entire body. It removes the feeling of tiredness and lethargy. It is effective for amblyopia, strabismus, optic atrophy, retinal dystrophies.

Light Blue Light (480-510 nanometers) calms, has a bactericidal action, lowers blood pressure, headaches and appetite. It eliminates inflammation and is effective with myopia, spasms of accommodation and inflammatory diseases of the eyes.

Dark Blue Light (450-480 nm) has a control action on the pituitary gland, and the parasympathetic nervous system. It has antibacterial properties, reduces inflammation and pain and rejuvenates and enhances creativity and immunity.

It is effective in the treatment of inflammatory diseases of the eye, glaucoma, cataracts, corneal opacities, and vitreous.

Violet Light (380-450 nm) has a tonic effect on the brain and eyes. It helps produce happiness hormones (endorphins) and melatonin. It rejuvenates and enhances creativity and immunity. It is effective with cataracts, uveitis and corneal opacity.

Rejuvenation with the help of light and color is called vibrational healing, the foundations of which the inventor of Tesla Glasses has developed for more than 30 years.

The suggested procedural regimen is three to four procedures a day with the length of the procedure at four minutes. The suggested full course is 21 days. The number of procedures and the color are self-determined by the user. 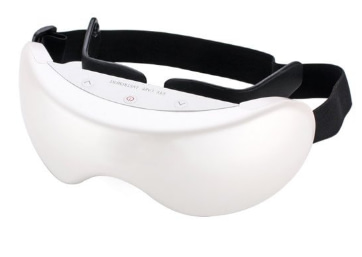 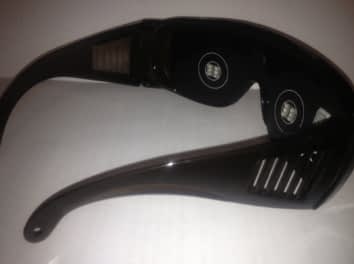 I am 67 years old and my eyesight had been deteriorating for the past 10 years and I was having difficulty seeing with my prescription glasses, so was due to change the lenses. I started using the Tesla Glasses and within three weeks I saw major improvement and was able to see the messages on my iphone clearly. I continued to use the glasses and my eyesight kept improving. thank you
Anonymous